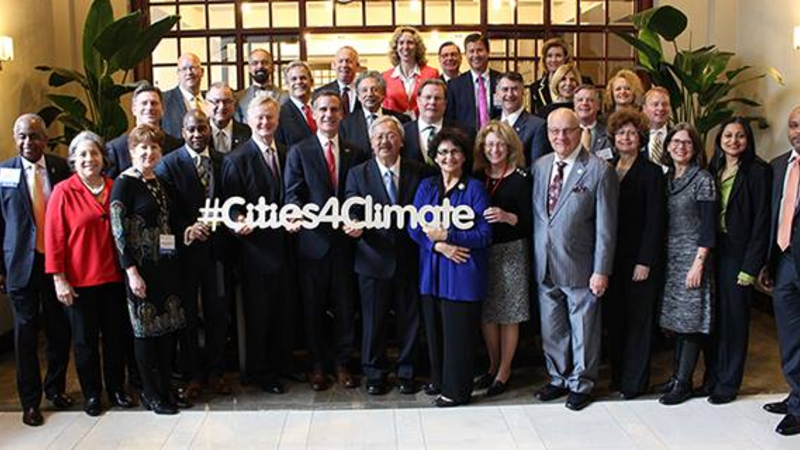 Dubuque Mayor Roy D. Buol was part of a group of U.S. mayors calling for climate action at The United States Conference of Mayors meeting in January. | Facebook

Dubuque leaders are continuing to try to find ways to adapt to changes attributed to climate change and how they affect the local community.

Gina Bell, sustainable community coordinator for the City of Dubuque, said that there have been noticeable shifts in the local climate in almost every season during recent years. The most noticeable has been the higher levels of precipitation in both the spring and fall seasons.

"We're seeing warmer, dryer summers and then increased precipitation in the fall and spring," Bell said. "And then more extreme weather in the winter. So it's not just the snow-pack that stay all winter, it's these big snowstorms and then no precipitation. And there's this volatility in the weather that we're seeing."

Information from the city indicates heavy rain in the city has increased approximately 60% since 1938.

City of Dubuque Mayor, Roy Buol, recently cited a claim by U.S. Global Change that average temperatures will increase by 11 degrees in the next three decades. With an estimated 50 more days a year during which temperatures in Dubuque exceed 95 degrees (F), there is the potential for extreme heat waves.

While some projections include higher agricultural yields in the short term, Buol said changes in the climate are expected to actually reduce yields in the long term.

In response to such warnings, the City of Dubuque is updating its climate action plan. Goals include cutting carbon emissions by 50% in the next decade, but there is no specific plan for reaching that goal.

The community has had a 60% increase in heavy rainfall since 1938, and the average temperature has increased by 2% in that time.

Want to get notified whenever we write about City of Dubuque ?

Sign-up Next time we write about City of Dubuque, we'll email you a link to the story. You may edit your settings or unsubscribe at any time.